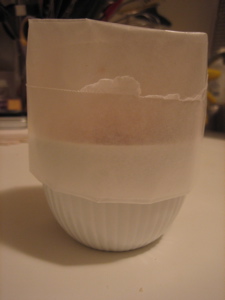 The Chocolate Souffle is by far and away my favorite dessert to make. Some are easily disuaded from preparing it, thinking that this is a complicated dessert. The indimidation comes in the form of egg whites, which sometimes have a mind of their own and, also, the fact that souffles have to be served directly out of the oven. Like most things in life it is purely about timing!

In a double boiler melt chocolate. In a separate bowl whip egg whites and cream of tartar until holds firms peaks. In another bowl whip together egg yolks and sugar. Combined sugared yolks and chocolate together and then fold into egg whites.
Butter the inside of six ramekin and then coat with sugar. take a piece of wax paper and wrap around the top of ramekin. This is done so when the souffle rises while cooking it holds shape.)
Pour evenly the souffle batter into each ramekin and bake for about 25 minutes.
Serve directly out of the oven with chocolate sauce and whipped cream!
(I sometimes cheat and make these earlier in the day and stick them in the fridge)

Double Boiler- There are special double boiler pots. I just use to different sized pots. Put about an inch of water in the larger pot and put the smaller pot in the larger one. This way the chocolate does not have direct heat which prevents from burning.

Egg Whites- When I say hold firm peaks. When you whip the egg whites the consistency changes. To know whipped enough take a fork and dip in and bring up there should be a peak the has formed with egg whites and will hold.