I had a doctors appointment this morning,  and conveniently my doctors office is right near the Nordic Bakery in Marylebone. (There are two locations in London) The design of the shop is clean, simple, almost barren. It does not matter- they have these Cinnamon Buns that I think are to die for. I usually like a lot of icing on my cinnamon buns, theirs have non and I am completely okay with that. They are baked throughout the day and always fresh and hot. Now they sell other Nordic treats, I can’t say I have tried any of them. Why would I, when all I want is the Cinnamon Bun. I am probably missing out on something great, in this case I am okay with that. 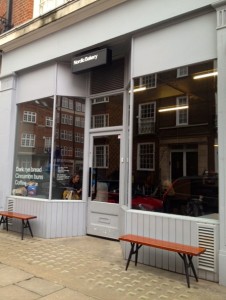 So my treat to myself since I was going to the Doctors was I got to get a Cinnamon Bun! I should make Doctor’s appointments all the time! OMG, I later today I was walking down Dorset street and smelled CINNAMON, there is another Nordic Bakery that just opened. This could be trouble, there is one even closer to me!!! 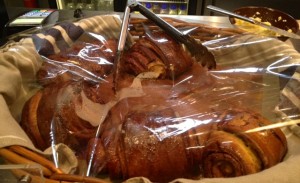 I love them so much ,I would work there for free to learn how to make them! They do have a cookbook which I want to get, with the Cinnamon Bun recipe, I am skeptic though that it will taste the same… Will let you know when I try. Here is the recipe is you want to try… 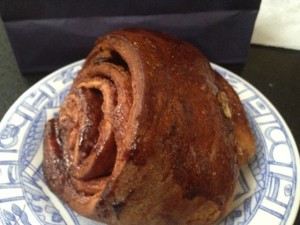 Brought it home and still warm!!