I realize I usually write about cooking, entertaining, tips, and ideas, but I think this is still somewhat relevant as it has affected my home.

Some friends said don’t write about it, because there still is, that stigma attached to having bed bugs. But I say, I would rather have everyone know and become a little more educated and know that it easily could happened to you. Although, I will say, I hope it never does. Even if you live in a nice area are super clean and have no clutter don’t be fooled and think you are safe from it. Bed Bugs are an epidemic that has hit New York City like wildfire over the past two years and is up 47% since last year. Only 1/3 of people react to the bites, lucky for me I have a severe allergic reaction to them!  They are very hard to find. They can hide in walls, move through pipes, live in almost anything. They bite until the hit a capillary, and they donâ€™t need to feed every night. I have had a lot of conflicting information on the life span but most say it is 400 days and a female bug can lay 5 eggs a day. You can’t just bomb your apartment, everything needs to be packed up.  And you can’t just move, you have to make sure the problem is cleaned up where you currently live or you will just bring it with you to your next home.

For the past three weeks, I have been living a nightmare. One that cannot be completely explained but anyone who has gone through it would know just how horrible it is. I am living out of trash bags, putting my clothing in the refrigerator because I am paranoid, am on antibiotics, have had to stay in hotels, sore from all of my bites, and had many sleepless nights with fear of being eaten/bitten. Now, I always try and look at the glass as half full and there have been some positives, I have cleaned out my apartment, will have super clean clothing, I am turning my apartment into a craft studio. Before I detail the situation I am very grateful to those who have been supportive to me throughout this ordeal. Thank you. 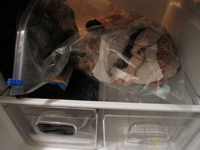 Day 4- Went to a dermatologist to have a doctor examine my bites- ruled out all other kinds of bug and spider bites, 95% sure I have bed bugs. I decide to grab dinner by myself to try and decompress.

Day 5- Get a new bite and realize this must be bed bugs and call my management company. That day Roberta my â€œfairy god mother to bed bugsâ€ came to my apartment to inspect. Could not find anything but my bites were classic bed bug bites and recommended that I have a trained beagle come into my apartment. Spent the evening washing and bagging clothing in a laundry mat. I decide I would not stay in my apartment anymore until the situation was resolved.

Day 10-  The first appointment available appointment for the trained beagle to sniff the apartment. Roscoe barked and pointed his nose in three spots in my apartment: the bed, sofa, and hamper. Now, I wanted not to believe this little beagle but he is 98% accurate and I had bites to prove it. It was just  frustrating because no one thus far was able to find one of these little bugs that was tormenting me.  I spent the rest of the day starting the cleaning and packing process. Now I have been in this apartment for five years and every article of clothing needed to be washed or dry cleaned, every book vacuumed and all packed up into trash bags and knotted. I was working until 3 am since I had little time and they were coming to fumigate my apartment in less than 48 hours. By the time I went to bed, all I had left was a t-shirt and it was cold. I had no more blankets or pillows. I sprayed myself with rubbing alcohol (supposedly they donâ€™t like the scent) and got into a trash bag myself to prevent being bitten and to try and stay warm. Yes, a hotel might have been a better option but I was trying to process so much that nothing made sense to me and the costs of everything just seemed overwhelming to me.

Day 11- Went to work and spent the evening packing and cleaning. I did go to a hotel that night arrived with my infamous trash bags at midnight.

Day 12- I received no wake-up call, so was a little frantic as I was now running an hour behind. Like all moves you think you have made so much progress and donâ€™t have that much to do but then there is always so much more. They arrived at 2 pm sprayed my apartment and I was left with a sense of relief that my apartment was safe again. Now another two people still could not find the little buggers. At 4:30 I had my sofa removed to take no chances and then had to run and get another mattress cover and pillow covers. I was excited to think I had control again. I picked up some laundry that had my sheets and went to go buy new pillows and a blanket. I got home and when I was working in my apartment was wearing the same dirty clothing, I was so excited to take a shower. I cleared all the trash bags out of my bathroom. I had been advised to put them in there. Since that area was deemed safe and it would be easy to spray/freeze the rest of the apartment. By the time I moved about 15 trash bags into my living roomâ€¦there on the bottom of the tub I found them, TWO LIVING BED BUGS! They really did exist in my apartment. I almost lost it, but called Roberta, my bed bug fairy godmother. Not good, that the bug had moved from my living space into the bathroom which was considered a safe zone. She informed all the clothing would have to be re-washed and packaged. At this point I had a meltdown, I was exhausted in pain, overwhelmed, and the thought of doing it all over again was too much. It is funny when I first met Roberta she said I could call her whenever I needed something or had a question, I didnâ€™t think I was going to be that person who called at 930pm on a Friday night, but I was. It was another night in a hotelâ€¦ 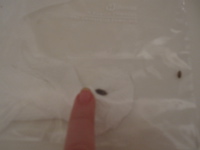 Day 13- I decided forget about doing my laundry again, I couldn’t handle it and just sent it all out to be done. Something I wish I had just done in the first place. I was just having such a hard time wrapping my head around it since I had just brought all of my dry cleaning to the cleaners and that cost was overwhelming. I decided I would not stay in my apartment over the weekend and stayed with a friend.

Day 15- they came again to my apartment to spray my bathroom. I thought it might be over. I was bitten that night

Day 16- was up all night and was bitten again.

Day 17- Went to Doctor because my shoulder was aggravated and became infected from carrying so many trash bags back and forth from the laundry mat. Pretty much passed out at the doctor’s office just overwhelmed by everything.  I went on antibiotics. Again moved out of my apartment and had another meltdown.

Day 19- Moved all dry cleaning into a storage unit. I did not want to take a chance of taking anything into my apartment.Â  I am really excited to now have two storage units in NYC. Thank you Manhattan Mini Storage.

Day 20- Slept again in my apartment did not get bitten.

Day 21- Don’t think I was bitten previous bites super itchy and slept with TV and Lights on.

Now I am waiting for day 24 when they come again to freeze/spray. I figure, I will not unpack until December it is now November 3rd and I will always have that thought will they come back and are they really all gone. Maybe next Halloween I will go as a bed bug victim Â but this year it was too close to home.