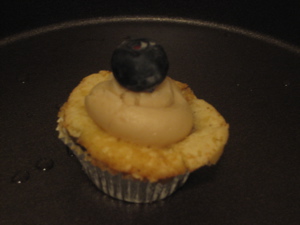 Blueberry Maple Muffins/Cupcakes
I was making a dessert for a friend’s birthday and I told her I would come up with something original. She told me don’t go crazy’ I guess people who know me, know I have a tendency to be slightly over the top. Anyway while I was trying to come up with something new I started looking at the ingredients that I had available that might be fun. I had two jars of Maple syrup. This lead me to think about pancakes and blueberry pancakes well then why can’t I do the same with a blueberry muffin. So I tried it. I used my Blueberry muffin recipe and added ½ cup of Maple syrup. I was so pleased with them I quickly called home as I always think of my mom when making Blueberry Muffins.
Well, that was not enough. Since the cupcake has taken over the country/world I had to make a frosting. I decided to go with a Maple Buttercream. It would be too much and for me to say that, it must be too much if the icing was globed on like a traditional cupcake. I just piped a little out on top of the muffin and topped it off with a blueberry. Now I had blueberry pancake cupcakes!

Whip all ingredient together until light. fluffy, and smooth.
Place a dolop on each now cupcake.