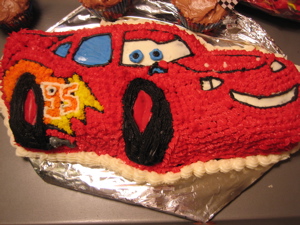 Remember your birthdays growing up? They were always a HUGE deal. Well, at least they were for me! This past weekend a little friend of mine was turning three and he loves the Disney Pixar movie- Cars. I was asked to make the cake for his big day with this theme in mind. I was a little nervous for two reasons: I was not sure if this cake was going to remotely resemble Lightening McQueen AND turning three is monumental at that age. In the end, after several hours of preparation, I have to say I was so excited about the final result! The best part is that this movie, like most Pixar films, is that it is for of all ages; it has become one of my sister’s new favorites- so she might be getting this cake for her 29th birthday.

In a mixing bowl mix together sugar, butter until well combined, then beat in vanilla and eggs one at a time. Once well combined stir in buttermilk. In a separate bowl combine flour, cocoa, baking soda, baking powder and salt. One cup at a time add flour mixture to sugar mixture until well combined. In this case I greased the Lightening McQueen Cake tin or the other option would be to grease 2- eight inch round cake pans. Bake for 35 minutes until a knife comes out clean. Let cool before flipping over to release the cake. This cake was decorated with a buttercream icing- more than anything it just took time and patience.

I also made Cup Cakes and put race flags in each of them to go along with the Cars Theme. 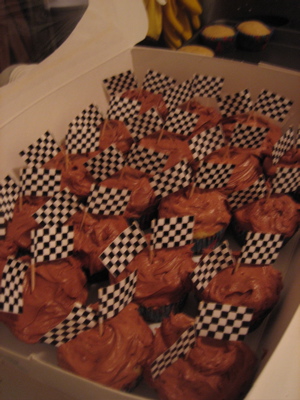 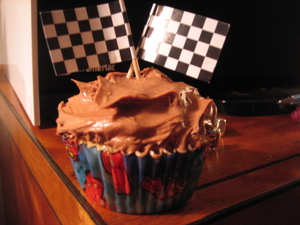 The favors were a little Lightening McQueen Car with candy wrapped in Cellophane paper and tied with a black and white checkers.