Thanksgiving is just around the corner which means the glutenous season is about to begin! Okay, so my mother would be upset with meâ€¦but I cheat when it comes to making pies. Sure there are a lot of great crust recipes out there, but it just adds so much time to the pie baking experience, which otherwise could be so simple!
I recently went to a Pre-Thanksgiving potluck and it was my job to a bring pie. I brought two classics; Pecan and Pumpkin. I thought since it was a potluck it would be easier for people to take a piece if they were individual pies. I used pre-made crusts and just molded it to tart shells. 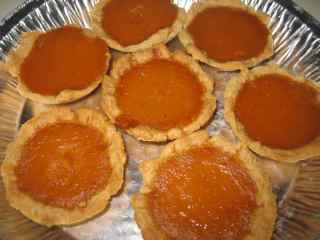 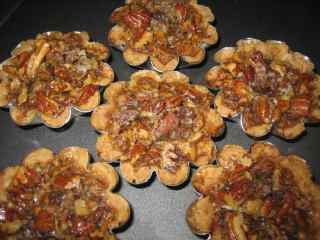 P.S. It happens to the best of usâ€¦after running an errand and taking the pies on the subway I crushed a few by the time I got to the dinner

Crusts:
Bake crusts as directed with which ever brade you decide onâ€¦I donâ€™t mean to discourage making your own!
9 inch pie crust

Mix together: Sugar, Eggs, Butter and Corn Syrup then add vanilla, brandy and lemon zest. When all mixed well together add pecans. Pour pecan mixture into baked pie dish. (Optional on the bottom of pie crust spread evenly chocolate bits and pour pecan mixture over it) Bake for about 50- an Hour. Until it is stiffened.

Bring Maple syrup to a boil. In a mixing bowl mix together pumpkin, egg, and cream. Followed by mixing in ginger, cinnamon and salt. Once everything is well combined add maple syrup combine well. Lastly, add Brandy and pour pumkin mixture into pie shell and bake for 50 minutes. ( if doing mini ones around 25-30) Bake until puree has stiffened and setteled.

4 Comments to “Pecan and Pumpkin Pies”