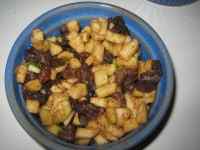 Recently, I had fried pear wontons for dessert. I thought that since apple season is quickly approaching, I’d try it with apples instead. They were equally delicious!

Mix all ingredients together except wrapper and bake for 15 minutes at 350. Put about a tablespoon of apple mixture onto each wonton wrapper and fold over sealing wonton together to egg white. ( this can be done by just brushing the ends of the wrapper) Once all have been prepared heat oil in frying pan and fry wontons until golden brown. Serve with either ice cream or whipped cream. If passing these whipped cream would be easier for dipping.