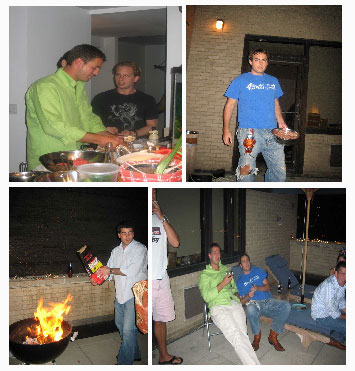 Summertime is always a great time for barbeques. Hamburgers are one of the simplest pleasures. How about making the ordinary hamburger party a little more festive by making it a competition of who can grill up the best burger? That is what happened on the balcony of this upper eastside apartment. Evan and Lee brought the best they had to offer in the intense â€œBurger Off.” I had no idea at the beginning just how competitive a burger contest could be. The judges were friends from both sides, so in fact it was great way to merge two groups together in a fun interactive way- where food is the focus, but there is an element of friendly competition. As each judge gave their comments and votes, by secret ballot, Evan emerged as the winner with his thick and juicy burger on a brioche role. (his secret recipe unfortunately cannot be shared)

For the next time- Rules need to be established up front and agreed upon. But all in all the first burger off was quite a success.