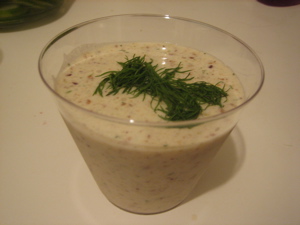 Recently, I was cooking dinner for a few friends and told that it had to be as close to calorie-less as possible. They had a bet going on at work and the final weigh in was this week. So I made two summer soups gazpacho and cucumber soup. We decided this would actually be great also as a dipping sauce. I would then just add a little less broth if you decide to use it that way.

In a bowl place the cucumbers and 1 teaspoon of salt and let stand for thirty minutes and then drain water from the bowl.
In a saucepan lightly sautÃ© butter and scallions with salt and pepper for two minutes.
Combine all ingredients in a large bowl except pecans and refrigerate for about 4 hours. In a blender blend together all ingredients and ready to serve. Top with some fresh dill. Add salt and pepper to taste as well as lemon juice and dill if you want a little more flavor. 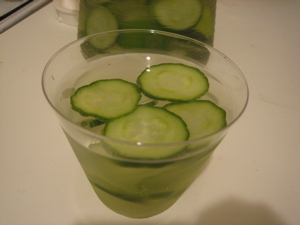